Coming Out At Work 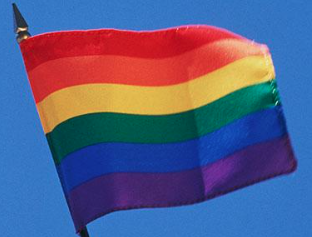 Hi. I’m gay. My name is Katrina and I’m still gay. We’re going to work together.

The big “secret” you have to reveal to everyone you meet. But they can look at you and tell, right? Not necessarily. Well, at least I can say I used to not be that obvious. With my short hair and wife, I could be cast on Orange Is The New Black. Yeah I said wife (that usually gets a double take, especially in the South).

That’s how it starts. A subtle hint at a wife instead of a husband. A gay bar. A parade. You have to do it. You have to come out to people all the time - especially at work. Whether you’re more of an “I’ll just put our picture here” or rolling out the rainbow carpet, it’s going to come up.

I find that most people fall somewhere between the two based on how long they’ve been out of the closet anywhere (let alone at work) and the gut check. There’s a bit of a gut check I do during the interview and before I’ll ever come out to someone at work.

Why the hesitation? I guess for me it’s a matter of someone knowing me for the quality of my work, not because I’m gay. If our relationship from minute 1 is about my gay-ness, I’ll eventually be known as the loud lesbian, not the loud all-star marketer that I am.

But here’s the thing. Nobody writes about coming out in the human resources industry; it’s taboo. You can’t ask a bunch of straight HR executives how it feels to be gay at work.

Katrina: Hi, I'm Matt, and I think this is one of the most interesting posts I've read in a really long time.  It's an issue we don't talk nearly enough about in this industry (which is kind of weird given our odd fixation on company culture and diversity) but after reading this, I think maybe we should.

Curious to hear what everyone else thinks?

Katrina - BRA.VO.  Really well said. I can't wait to read more on it.

Comment by Ryan Leary on July 2, 2014 at 4:41pm
Wow! Love the post. It is interesting that this is still even a topic that people are talking about...

I live the whispers "hey, is he gay?" Things like this are over with today in my opinion. A friends daughter is 16 and just came out to him and people in her workplace say "she is too young to know"

Not seeing it that way

Thanks, Katrina. I'm glad for you, and hope it went well.

Living in San Francisco, I have to remind myself that this is still a VERY BIG DEAL in many parts of the country.

Here's to my co-worker Katrina the amazing marketing all-star!

Love this post, Katrina! I hope in my lifetime (sooner, rather than later preferably) we reach a point that EVERYONE realizes how absurd it is that ANYONE should have to hide a major aspect of his/her life or fear a controversial reaction about who s/he is as a human being.

Like Keith, I sometimes forget that there are still far too many people and places where judgment and discrimination of others based on irrelevant personal details is considered “normal.” It stinks that some people still make a stink out of who someone else happens to be attracted to, fall in love with, or marries. I don’t get it, never have and never will.

Keep up the good work as an all-star marketer and keep the good content coming!

Have a bit more time on my hands now before I go home for the long weekend.

A few questions I have for you:

1) What's up with unicorns? Are they gay?

2) Why do you have to "come out?"  I don't mean you shouldn't, you should do whatever the hell makes you happy/ comfortable at work.  But I'm reading this email as though people at your work are judging you when you mention the parade, or the bar, or the wife.  Where do you live, anyway?  I'd hate to bring my luggage to your town.

4) Now I'm going to dangerously tip-toe the line of "my best friend is gay", but I assure you, it's relevant here- one of my good friends is Head of HR of an enormous and very public company, and is married to a celebrity newscaster. In other words, there is no secret that he is gay, and definitely no doubt that he's a completely by the book and damned fine HR guy; and I know many others, clients, candidates, recruiters, all members of big HR functions who don't have to keep any secrets about their sexuality.  So I guess my question is- if you're afraid of your folks not supporting you, or calling you the loud lesbian, or whatever else concerns you, or mainly people treating you less than equal, are you at the right company?  Leaving sexuality out of the conversation, if I had concerns about people not treating me fairly because of one of my god given gifts, I'd bounce.

Have a happy holiday, y'all.

2) I think it's a 50/50 thing. I think I go into a job with some assumptions - 1 being I don't know how people feel about gay people. I also think most workplaces hire with an assumption - that someone is straight. I'm not saying everywhere, but it's real. When those two mix, I feel like I personally go into assuming I'll need to come out. I work for an amazing company (the one who owns this site and whose owners are some of the awesome guys who commented above) but I live in Nashville, TN. And  let me tell you, Tennessee can get a little weird. When I was looking for a job in April, I was definitely prepared to have to come out. It's a great town but... still in Tennessee.

3) I hear you - sex is definitely taboo. But gay sex is more taboo.

4) Truth. If someone finds themselves at a company where they don't feel equal or supported, they absolutely should bounce. That'd be my advice. There are a lot of people who are out and lead at great companies where they're 100% supported. I'd suggest that there are some percentage of closeted ones too, unfortunately.

Appreciate the comment and hope you'll be back for more.