The Mastery of Recruiting? 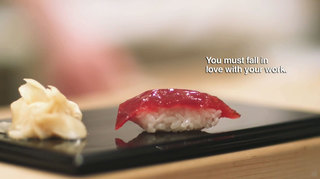 Last week, my wife and I watched a fine documentary on TV called Jiro Dreams of Sushi. It was about an 85+ year old master sushi maker named Jiro Ono who has a 10 seat restaurant in the Tokyo subway. He probably makes the best sushi in the world, and maybe ever. He only serves sushi, and it costs about USD $300 for 20 pieces. He’d been doing it for about 75 years.

The documentary talked about his life, his approach to work, his family (his two sons were in the business), and people who knew/interacted with him.  Here are some interesting quotes (with some editing from me) from the movie. (The quotes are from various people throughout the movie and not all can be attributed to Jiro Ono.):

Once you decide on your occupation you must immerse yourself in your work. You have to fall in love with your work. Never complain about your job. You must dedicate your life to mastering your skill. That's the secret of success.

It really comes down to making and effort and repeating the same thing every day.

It has to be better than last time.

A great chef has the following attributes:

He always worked incredibly hard. He would only take a day off if it was a national holiday.

It is essential to check every detail.

The way of the shokunin (master craft[wo]man) is to repeat the same thing every day. Shokunin try to get the highest quality (fish) and apply their technique to it. We don't care about money. All I want to do is make better sushi.

I do the same thing over and over, improving bit by bit. There is always yearning to achieve more.

I'll continue to climb, trying to reach the top...but no one knows where the top is.

I fell in love with my work and gave my life to it.

Just when you think you know it all, you realize that you're just fooling yourself.

There’s a great deal to take from these quotes, and the movie, too. I bet you’d expect me to say something like:

“To master recruiting, we should view it the way Jiro views sushi making”.

To paraphrase the ad on AMC: “You might think you know where this is going, but you’d be dead wrong.”

I think there are very few people (and I am NOT one of them) who have the basic ability combined with the obsessiveness to totally devote their lives (at the expense of much else) to mastering a given art/work As I mentioned, Jiro had (two) sons, and they’re both in the business. He joked that when they were growing up, he’d often come home from the restaurant only occasionally, usually on Sunday mornings. Jiro joked that they’d say: Who’s this strange man sleeping in our house?” To be a sushi shokunin, Jiro had to sacrifice his family life. (It was interesting that there was never a single mention of a Mrs. Ono, either present or past…)

My wife and I have had the opportunity to know to some degree two MacArthur (aka “Genius”) Grant winners. While they were doing very noble things, they were both quite obsessed. (In one case, it damaged their physical and mental health, and broke up their family.) Two examples do not a strong case make; at the same time, I’ve found a number of work-obsessed people to be rather difficult and/or unpleasant, especially to work for. In summary: I think there are few people who are obsessed enough to become masters of their art, and even fewer who don’t delude themselves into thinking they can “have it all” without any consequences- all they need to do “ is “work harder and keep up that PMA (Positive Mental Attitude). Maybe YOU can, but most of us CAN’T, and demanding to get that from someone who doesn’t share your obsession isn’t right – neither is burning out someone and then tossing them away like last week’s garbage. Maybe I’d feel differently if I were half or a third my current age, but I‘ve chosen the course to be more of a moderately well-rounded, fairly competent, not too-unpleasant human being who views his life as something to experience and not just a bunch of things to tick off a “to-do” list on the road to being some type of superstar/guru/ shokunin. I can’t really speak for you (only you can do that), but I think for most of us, that last one is a realistic course to follow

This is a great post (and have to admit, had wanted to write up this movie for a little while as it's an outstanding doc, but think you captured its essence!).  It's one thing to be talented, but as Jiro Dreams of Sushi shows, transforming that talent into repeatable, sustainable and world-class outcomes is something only a handful of people have the discipline, commitment and passion to do - and an important lesson for all of us striving to become better at our craft. Although I think you're getting close on writing and community management.

Thanks for a great read.

"Always try to improve upon yourself. Always strive to elevate your craft."

Good article. However, this quote resonates with me.

@ Steven: Thanks, too. This quote SHOULD resonate with us. We should seek to improve ourselves and what we do. At the same time: what happens when we realize (or find out) that we've hit the point of diminishing returns-  the point where the curve levels out and no matter how hard we work, how much careful time we put in, how much passion we show, we'll never be a superstar/guru/shokunin? If we go back to an earlier movie- "Amadeus" (http://en.wikipedia.org/wiki/Amadeus_(film)): what happens when we learn we will never be Mozart, only Salieri?....

The story is told of Zusha, the great Hasidic master, who lay crying on his deathbed. His students asked him, "Rebbe, why are you so sad? After all the good deeds you have done, you will surely get a great reward in heaven!"

Keith - awesome post and an even better movie. I loved this documentary and you shared some key points. Recruiters often have a tendency (especially new recruiters) to way over think the process. Or spend way to much time looking for the silver bullet. There is no off switch in recruiting, but if you're good at it and love it, it is no different then any craft as long as you put the time in. No need to re-invent the wheel.

Thanks, Tim, got it one. As I frequently point out, recruiting is fundamentally “quickly and affordably putting quality butts in chairs”. While the tools and techniques change, what we do remains essentially the same. However, tis hard to make money selling the “same old, same-old” so we will continue to see slick hucksters with high-level connections ready to sell the latest recruiting snake oil or “magic bullet” to desperate and not-yet insolvent recruiters and their superiors who fail to recognize that in most cases they are futilely “rearranging the deckchairs on the Titanic” of their companies’ ill-conceived, over-blown, grossly-dysfunctional hiring practices. The hucksters make money, the recruiters (heads) show to their bosses they are keeping up with things, and the fact that quite often *nothing gets better is a very minor consequence.

Nice to see you write an article rather than comment. I found your piece interesting if not unsurprising. I'll have to watch the documentary.

I've always argued that in order to become *really* good at what you do, you have to have some degree of an obsessive personality. While being labeled "obsessive" has negative connotations, anyone who has a strong work ethic, who's driven to excel, etc. has an obsessive personality to a lesser or greater extent. Look at any top athlete, musician, scientist, recruiter, etc., and tell me they weren't obsessed with taking their craft as far as it could go.

If I did not have an obsessive personality, I certainly would not be where I am today. The trick for anyone who does have a degree of obsessiveness is keeping it in check to healthy levels so that it does not have any negative effects on other people or areas of your life, yet "letting it run" enough to gain the benefits of mastery.

The points about repetition in pursuit of increased proficiency mirrors the concepts of deliberate practice and the findings of Talent is Overrated and The Talent Code - both very good books.

@ Glenn: Thank you. It's hard for me to come up with new material- it's much easier to piggyback off others. Perhaps I'm the "Master of Lazy Writing"....

As far as obsessiveness being required for "really good" at what someone does, I'm interested in hearing more about what that means, if you care to share. I distinguish between hard work /strong work ethic and obsessiveness- with the fist being good and the second being bad. An example; If someone decided to put in the time to study improved recruiting techniques instead of binge-watching "House of Cards" from Netflix, I'd regard that as a strong work ethic and "good".  If someone was answering recruiting calls during her daughter's poetry slam, I'd regard that as obsessive and "bad". I define obsessive as: "activity performed to the level of negatively impacting other important aspects of life."

"If I did not have an obsessive personality, I certainly would not be where I am today." I sometimes think some  areas DO require an obsessive personality to achieve world-class mastery. Maybe to become the very best pro-football player, you need to accept that you may destroy your body and suffer traumatic brain injury which may kill you at an early age. Maybe to be a great coder you need to sit and program 16 hours /day and have no relationships. Also, what if you have the drive, you put in the time, and YOU JUST AREN'T (and will never be)THAT GOOD? I can personally speak to that: When I was a kid back in the Bronze Age, I took gymnastics a number of years as past of the Summer Youth Program in my town. The teacher/coach: said to me: "I've hardly ever seen someone work as hard as you, Keith, but you just aren't built for this." She was right.... Our talents, drives, passions are all over the place, some have 'em all, some one or two, and some have none. I'm afraid I don't believe that inside each of us there is a potential superstar at SOMETHING, and we just have to find out what that is and have the will to put in the time and hard work to achieve it.

I haven't read those books you mentioned, but they sound interesting. I liked Malcolm Gladwell's earlier book Outliers where he discussed a lot of success is determined by luck: better athletes tend to be the oldest (most physically mature) ones in their group, so they do better and get the encouragement that helps them work more at it, which helps them get even better, and so on....

@ Bob: Thank you . Go then and meditate on the sound of one hand placing....

Really enjoyed this article, Keith and the comments too. Whether writing your own fresh content or adding comments to others' posts, you always bring a special flair to the conversation.

You are very kind, Kelly.