an act or instance of using or closely imitating the language and thoughts of another author without authorization and the representation of that author's work as one's own, as by not crediting theoriginal author

I received an email about a search (LinkedIn connection invitation format) from the following person, a recruiter. 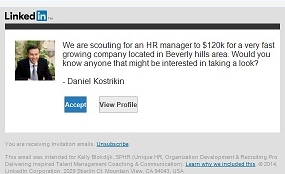 As I typically do prior to responding to any message, I clicked on the profile of the sender to gather some information.

Imagine my reaction (it went something like this @#$%^&!!!!!) when I immediately recognized a specific segment of that guy’s summary section as MY OWN WORDS from my profile.

That’s right. Words that I placed together to form a phrase, sentence or statement on MY very own LinkedIn profile summary section about MY very own professional situation actually appeared VERBATIM on that person’s profile.

Now, you may be thinking: how do you know those are YOUR words, Kelly…?

Well, you see, having written, edited, tweaked, fine-tuned and modified my LI profile umpteen times over the years, I am quite familiar with exactly how I worded certain (all) sections. (Doing all that wordsmithing might seem anal-retentive to the average person, but that's how I roll, yo).

Not only that, but the segment in question refers to a rather unique aspect of my work life, not one commonly found in others. And, even if someone else did have a similar “story” it would be highly coincidental that s/he would depict it the same way, using the SAME EXACT WORDS that I chose.

And, as I’ve been told many times, my writing style and tone tends to have a certain distinct zing to it. Probably because it comes from MY head through MY fingers to MY keyboard to the eventual end location on a page or screen.

See for yourself. Other person’s profile 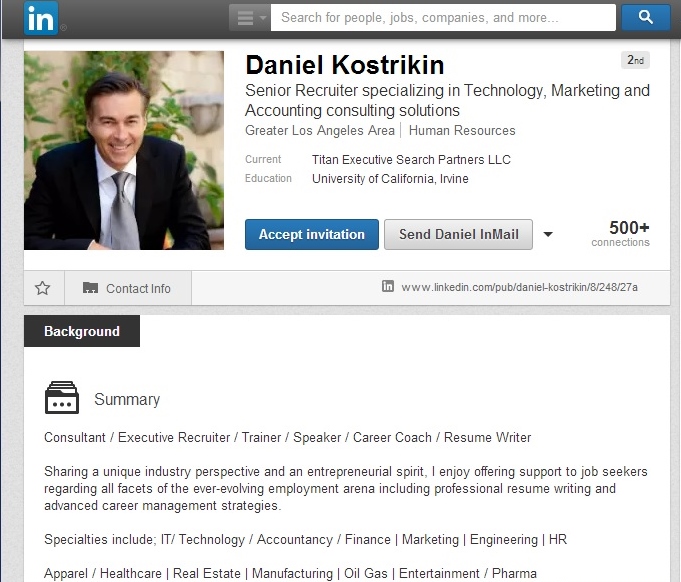 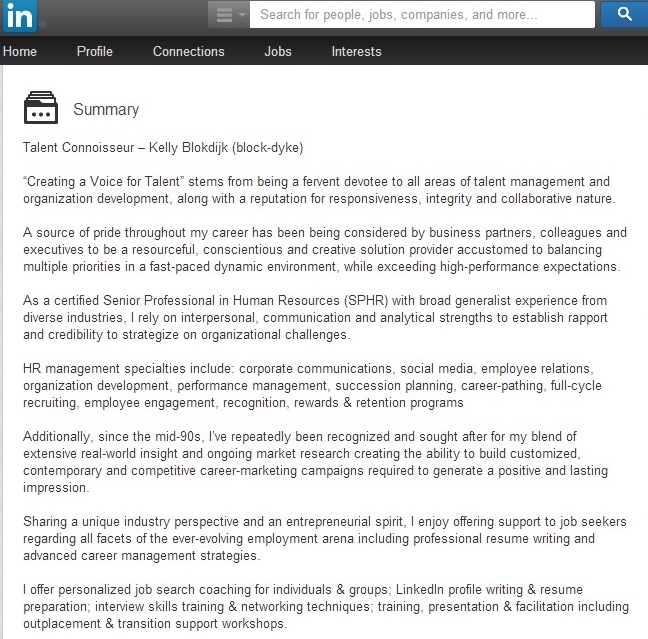 You may notice that the segment in question flows with the remainder of my summary. And, if the rest of my profile was shown here, you’d notice that it illustrates that particular part of my background in the context of my career in general.

However on the other profile, this phrase is just placed without any logical correlation to that person’s information listed under the employment portion of the profile.

So what’s the big deal, Kelly? (You might be wondering…)

While it could probably be argued that LinkedIn profiles (being publicly available) are not necessarily intellectual property of the profile subject or writer, they most certainly are reflective of that person’s description of her/himself professionally. That being the case, there is an implied expectation that what goes on each person's profile is his/her information, not up for grabs for anyone else to duplicate on his/her profile.

Especially if it's part of our professional identity or occupation, most of us take pride in our own original creative, written, artistic or any other tangible work products. Thus, being that ORIGINAL writing is a huge part of my work, I consider my LinkedIn profile an example of that concept.

Unlike this guy, it would never occur to me to scrape someone else’s professional description or other content and use it as my own. More importantly, I would absolutely, positively, never-ever work with a recruiter or anyone else known to do such things.

Not only does this guy come across as sleazy, unprofessional and unethical, he ranks up there on the branding #FAIL list for contacting the very same person he decided to plagiarize.

Thanks, KB. Back in the '90s or early '00s, I saw some recruiters' resume used exactly the same phrase about themselves that I'd used. (it wasn't anything particularly common,  it was moderately long, and I like to think I originated it...) As my dad used to say about composers: "The Good steal from each other, the Great steal from themselves..." (I wonder if HE came up with that, or if he got it from somebody else- can't find it on Google.)

Holy cow.  I am speechless.

Kelly: As Inge says, "Originality is plagiarism undetected," but I'd go ahead and say that this response to this particular Jack Hole in fact evidences originality at its best. By the way, he's a neighbor of yours down there in SoCal, so you should stop by and say hello.  Drop him a line at Dan@Titanesp.com or 310.833.6200 and introduce yourself :-)

Pretty Shocking, especially for an "Executive" recruiter, who should know better. (Actually, executive or not, one should know better). Kelly, good on you for catching this. Did you confront him about it? Just curious of the reaction and if/when he will retract it from his profile.

that's guano crazy. a better inmail might have been "hey I liked this part of your profile SO MUCH I stole it...." lol

A whole paragraph is quite a lot...  especially on a profile that is supposed to be a presentation of one's own work.  Not cool, but "imitation is the sincerest form of flattery."  Apparently, he is a fan of your writing.

In case you were wondering what happened next... Consider yourself enlightened! 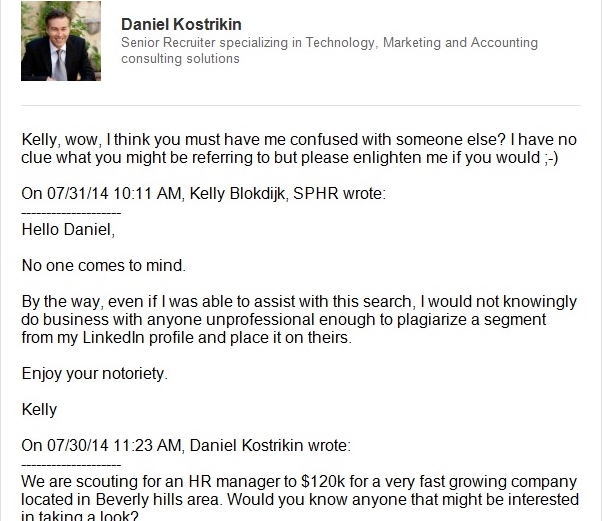 Im a firm believer in Karma, and it always makes a return trip.

A brilliant short story about plagiarizing "Don Quixote" is worth reading.  http://vahidnab.com/menard.pdf