LinkedIn Acquires Bright: Why The "Professional Network" Really Bought A Job Board 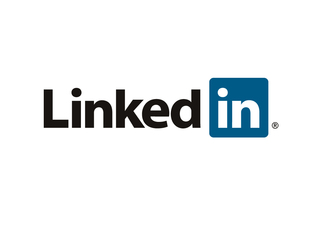 Today, LinkedIn announced its acquisition of Bright for an announced $120 million.  Bright, the fastest growing online career destination and third largest overall job board, which generates approximately 72 million unique monthly visitors in a highly competitive, highly fragmented industry.  This acquisition came only three years after the company's founding, and only a few months after it raised its final $19 million round of Series D funding.

"We decided to join LinkedIn because of what we lacked – the ability to apply this technology across the entire economy," said Bright founder Eduardo Vivas.  "We share LinkedIn’s passion for connecting talent with opportunity at massive scale. And we agree that the old models for online recruiting are hopelessly broken."

Parker Boarille, VP of Product at LinkedIn, claims that the acquisition was shaped over a similar shared vision, echoing the altruistic sentiment behind "connecting talent with opportunity," but corporate messaging aside, Boarille alluded to what was really behind the acquisition.

"We’ve invested a lot of time and energy into developing products like “Jobs You May Be Interested In” and LinkedIn Recruiter that use data to match members with the right opportunities and employers with the right prospects at scale."

Back in December, I spoke with Eric Owski, VP of Strategy for Bright (well played, by the way), and was incredibly impressed by their underlying data science and algorithmic approach to talent matching.  As I wrote in that post, their underlying technology, Bright Score, indicates, on a scale of 0-100, how closely a candidate’s resume matches a job description.

The result of an 18 month comprehensive study covering millions of job and resume pairing – and insight from real recruiting leaders to add qualitative data and context, utilizing a proprietary matching algorithm provides a powerful tool for candidate sourcing, screening, and self selection.

That the Bright Score will inevitably be a core part of the "Jobs You Might Like" feature for LinkedIn users and a capability that will be easily moved from resumes to profiles to pretty easily see which candidates work best, and this will be a key selling point to increasing their market share to employers while also making a move to put job boards out of business.

But as Owski freely admitted, Bright wasn't actually designed as anything more than an experiment - it wasn't founded as a recruiting company, but instead, a data science company, and recruiting was simply the challenge to which they decided to apply, tweak and refine their formula.  The real play for LinkedIn - and implications for the entire HR tech industry - extend far beyond recruiting.

“We’ve designed something much larger than just a job destination,” Owski said in December.  “Bright Score is capable of giving companies a lot of intelligence on their existing workforce, too.  We’re interested in matching people with the right jobs, and we see helping companies identify internal talent for roles as being part of what our data science delivers. Brightscore will be our engine, but the possibilities will be endless.”

Look for a move from LinkedIn to move from recruiting destination to competing in the larger integrated talent management picture sometime in the next 12-18 months. In the meantime, the good news for competitors is that this acquisition clearly signals LinkedIn doesn't think resumes or job boards are dead, either.

I'll admit I don't know a ton about Bright. However, I do know this. We have a client who was unknowingly getting their jobs scraped by Bright. Now candidates were being directed to a Bright hosted page with the company's job description. And one of the first things the candidate would see on the page is a prompt to register for Bright.

So, they were basically hijacking traffic from a company's career page to get signups for their own. The only way this company found out was seeing Bright as a source in Google Analytics, then going and finding the pages for themselves.

Am I the only one that doesn't see this as being on the up and up? And they get rewarded with $120 million acquisition by LinkedIn? I'm sure I'm missing the whole picture as I only had that one experience with Bright. If so, please enlighten me.

Here's what Bright recommends for me. You tell me how accurate the matching is. 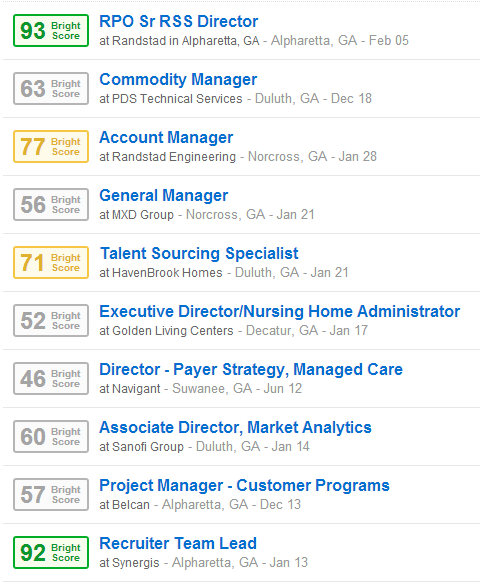 That's really interesting - while it was private, Indeed was acquired for a large sum as well for pretty much similar methods, although they were obviously transparent with this aggregation.  I think it's endemic, and you raise a really interesting point...really curious to hear what everyone else thinks, so thanks for bringing this up.

Glen - here's mine, it obviously doesn't take culture into account at all in its matching... 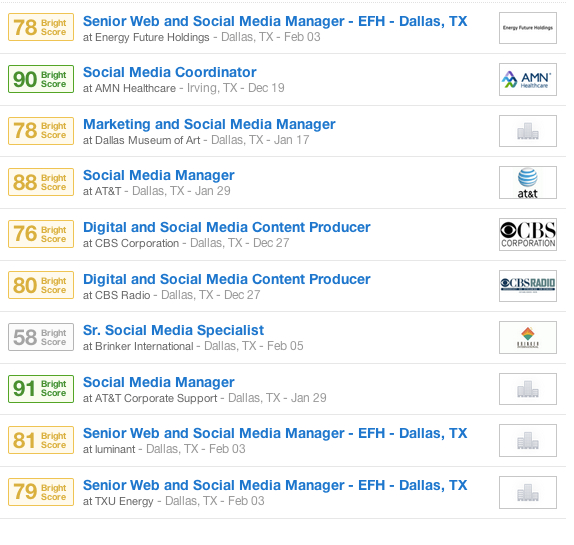 I poked around a bit and did some experimenting with different configurations of content. For the most the part, it seems purely key word driven (not that there's anything wrong with that). It just doesn't seem much more sophisticated than the other legacy sites that have had that functionality for decades.

A high match could equal a true match or a minimal match - in the case of very brief/basic postings. Like all of the other apps, what appears to be lacking is contextual relevance between the collection of words on both ends.

Pretty wacky that high matches span multiple levels as in Matt's case with top two being sm mgr & sm coord. And, with Glen's top four: director, team lead, mgr & specialist. It would be rare that a coordinator or specialist would have same skills as mgr or director.

It seems like you could probably load up just on a bunch of soft skill terms and still come up with the similar results as listing only hard skills.

It is interesting to see the range of scores between the exact same title from low 50s to low 90s - doesn't make sense and can't imagine it being reliable.

Couple of examples from my results:

Top score (of all variations) 93 - for position that I "could do" yet would not consider a logical fit for me or the org. That was a very skimpy posting, so I'm guessing that's why the score was so high.

2nd highest score 89 - very unappealing post, not one that I would be inclined to apply to. Aside from having same terminology, I would consider it less of a match than some of the listings with scores in the 50s.

3rd highest score 87 - previously applied (same job, different time) got automated thanks, but no thanks email (never directly contacted or interviewed by co). So I guess the co didn't agree that I was as much as match as bright thinks.

4th highest score 79 - interviewed there many years ago and wouldn't reapply even if they paid me to. Not even close on the cultural fit and it's one of those places that seems to have postings up all of the time. Either they don't know what they want (probably), have high turnover (maybe) or are constantly rapidly growing (doubtful).

Bottom line: not convinced there is anything magical about this product. On the plus side though, it is simple and easy to use and navigate.

Kelly, Glen - my experience w/Bright matching was similar. I guess I wrote it off (oops) based on what I saw as (once again) a failed matching strategy - something I've seen many times over the years. But obviously the folks at LI (literally) bought it. Will be curious to see what effect it has this time next year.

Did you notice what did happen with Bright traffic as soon as they stopped advertising?