Anyone that has spent time researching different applicant tracking systems (ATS) has no doubt found numerous recommendations and opinions online. Many folks start their research by seeking insight from colleagues on sites such as ERE.net or RecruitingBlogs.com, while others turn to sites that offer an ATS directory.

When it comes to directories, I have a preference for… Continue

The Art of University Hiring

In my experience in helping to set up the recruiting at local universities in my previous job and then working on doing the same for my current organization, I thought it extremely important to share some insights on this. I have been doing this for 4 years, and it is amazing how some companies do this right and some just don't get it. I was answering a question on LinkedIn that prompted this article, so as promised to those who read that response, here is a much more detailed version on… Continue

Contract VS Permanent: Can I make the switch?

Many people switch career paths between contract and permanent opportunities and there is absolutely nothing wrong with that. Everyone has different motivations for this move from opportunity to work environment to the lifestyle associated with contracting. I would like to discuss candidates who have been a long time contractor who are interested in permanent opportunities.


This is a trend I have seen more commonly as of late. Most candidates are alluding to the recent economic… Continue

Take a closer look at any rec-to-rec's books or website, and among the straightforward consultancy and managerial roles, you will more than likely find a number of stealthily exaggerated opportunities. 'Worldwide Operations Director' may seem like a prestigious position, but why does it only require six months' branch managing experience? If you Google the employer… Continue

Need a promotion? PROMOTE Yourself!

I've spoken before about that success of an HR person, or a Recruitment professional in the corporate world is akin to an umpire in a sporting event. If you don't notice them, then they are doing something right.

However, as some of my English friends say.. "Bollocks to that"

In the Recruitment world, Agency or Internal, it is a challenge to get that promotion, unless of course you are the last person standing in an agency! I know many people who now run 200+ people… Continue

Some days there is nothing like waking up, stretching out, watching your dogs cuddled nicely on the bed, your lap top open and ready to conquer the world when you stop and wonder, why on earth would anyone want to drive into the office today? One of the benefits of owning your own business is that you can define your work life and your work place. With the age of Twitter and Facebook allows you to be everywhere and anywhere and “work” can take on a whole new meaning.

With the price… Continue

Is Social Media Changing Use of 3rd Party Staffing Vendors?

July 14, 2009
For the short term, I believe yes. It creates a forum for people to connect, and find new candidates in mass form. However, the great thing about Recruiters is that we take all the information in, whittle it down and create a nice tight package wrapped in the form of a great candidate. This is what we do.

Think about it – you post on Twitter that you’re looking for an Art Director. It gets retweeted time and time again until your inbox is overflowing and you don’t… Continue

Why do Recruiters want to hear Objections from Clients and Candidates?

Did you know that over 60% of sales are made after the offer has been rejected 5 times? If you are a recruiter or an account manager then you need to make certain that you are hearing NO as it may happen 5 times before you get to a YES. It doesn't matter if you are asking for them to send you a resume or return a signed fee agreement. Unfortunately 75% of the recruiters and salespeople out there will give up after the first rejection. This explains why 20% of the team closes 80% of the… Continue

A little more than a year ago I was asked to participate in something I personally had never done before. Help create a sourcing team from scratch. After taking a rather large gulp of my soda I began to think about all of the various things that needed to be done. Can it be done? How long is it going to take? I quickly knew my biggest challenge was gaining credibility as a sourcing team and instilling confidence within the team as well as our peers.

In a market where many sourcing… Continue

The Client Side - Where Are We In This Whole Thing????

After a recent placement I sat at my desk and thought, I really love this business. Client's Happy, Candidate's Happy, Recruiter's Happy, Me........we all win. That's the great thing about this business. When we win, we all win. And at a time like that, even a little dry period looks like a good thing in hindsight. It's over, but sobering and helps keep you grounded and focused. The problem is, right now I don't think this downturn we are in is anywhere near over. I talk to a lot of clients and… Continue

Temp to perm fees. Are we absolutely stark raving mad?

Here is a prediction. As the market recovers the first impact on our industry will be a revival of the temp and contract market.

Employers will see increased work volumes as the economy recovers, but will “dip their toes” into the labour market at first, hiring flexible solutions initially. But then, as momentum is gained and confidence returns, they will start to hire permanently. But the first place they will go for their permanent hires will be to transition tried and tested… Continue

Why all the snark?

It may be a sign of the times. It may be a result of the web becoming an open forum for the masses. It may just be that people are generally unhappy. I don't know the reason why explicitly, but I do know that there is a lot more snark in the world today. You might wonder what I mean specifically, by the term "snark." It's more than negativity. It's more than being opinionated. It's the negativity and commentary that is infused with venom, spite and oftentimes pure hatred.

I am a… Continue

Overheard This in the Bathroom Today

2 ladies from finance were chatting about one's niece who had foot surgery and had gone back recently to have the pins removed. "You're not going to believe what happened to my niece the other day," she started. And she goes on to explain that while in the doctor's office, the niece half-jokingly said that she would love to work there as an X-Ray Tech. The doctor half-jokingly replied that he'd hire her, but she left not knowing if he was serious. When she returned the next week for the follow… Continue 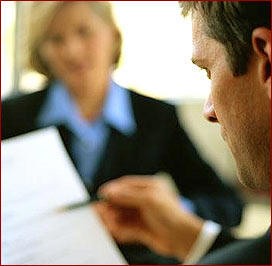 At one point or another, I am pretty sure all of us have experienced the "edge of the seat," "nail-biting suspense" of being on the "chopping block." Fearful of getting that dreadful "pink-slip," self evaluation often comes at a time when, let's face it...it's a little too late. Whether on the giving or receiving end, by choice or unexpected economic crisis, we all know the feeling too well. But the question… Continue

The birth of the job wanted description

That’s not a typo. I’m not talking about writing a job description. I’m talking about you writing a job wanted description. I’m sure you already have a resume, cover letter and business cards to pass out but here’s a thought - why not create a job wanted description that tells the hiring manager or company exactly who you are, what you do well and what you’re looking for. Let’s discuss how this would differ from a resume.

What are you trying to accomplish? Anyone who reads your job… Continue

Are we there yet? Has the decline in hiring finally reached the bottom?

Perhaps the most common question I get asked these days is whether the dramatic decline in the staffing market has leveled off. My own staff, clients, candidates, even journalists want to know whether there really are any ‘green shoots’ in terms of employers venturing back into the labour market.

As anyone in recruitment knows, the answer to that question is a moving target, hard to pin down at best, totally elusive at worst.

And of course it depends what sector we are… Continue

Hey Recruiter, I thought you were on my side! Part II of III

We have spoken about the circumstances around recruiters being less than cooperative with candidates and the many reasons. Yes, sometimes it is just perception on the candidate's part that a recruiter is not acting in good faith as I outlined in the last couple posts, but sometimes there is shared culpability.

Attracting Talent, It's All In the Story...

Employer of Choice, EVP (Employee Value Proposition) call it what you will but attracting talent to your business is a serious business and give it any cool name or anagram you like, it's also bloody hard!

So why do most companies suck at attracting talent and end up spending huge sums of money with recruitment companies, as usual, the answer is a leadership one. Those organisations who are phenomenal at attracting the best talent, have as their best talent guy/girl, their CEO.… Continue

Until about 6 months ago, I had the best recruitment job in the world !

Seriously. CEO of a global, yet niche recruiter, with 450 staff spread across 30 offices in 15 countries. We dominate our space in most markets, we are highly profitable, and we do cool things all the time (see Aquent.com)

But that was then. For the last six months I have had one of the hardest, least rewarding jobs in recruitment (well that’s a hotly contested title I know, but it seems that way to… Continue

Whether you are a management professional, chef, engineer or jewelery designer, each one of us is lured to fake our resume to get the dream job. Some people call it “absolutely unethical”, whereas some people feel that is “fine” to fake one’s resume.

When we graduate, we are on a warpath, ready to take up the challenges and face the world with whatever we have. But when reality bites, the picture seems a lot more different and we are willing to do whatever it takes to make things… Continue