What lies beyond the search box? Maybe better solutions....

Last week Jakub Zavrel posted a fascinating piece on ERE.net asking the eternal question: Are Job Boards Still Relevant for the Future of Recruiting?  I strongly encourage you to read it (and definitely check out the comments – Steven Rothberg has some pertinent thoughts, too!).

The results are in from the 2013 Online Recruiting and Job Board Trends surveys. Here are some interesting tidbits:

Godzilla vs. Mothra: competitive innovation from LinkedIn and CareerBuilder?

It seems that Monster is continuing its long, slow fade as the ‘big dog’ in the job board world (funny how long-term lack of leadership can do that to you). But there are plenty of services vying for the leadership role:Indeed, CareerBuilder, and LinkedIn come…

Simple vs. complex: why the former wins

Have you tried applying for a job lately? If the employer is of any size, you will probably be directed into an applicant tracking system (ATS), where you will fill out many pages of questions. It can be a time-consuming process – and this is prior to actually applying for the specific job.

It is complex, and it is a pain.

What happened to the wonderful old days when you submitted your resume and cover letter, and called it…

Is it time for job boards to get a new name?

Last May I wrote a post about  the concept of a ‘job board’, in which I asked the eternal questions, “Is LinkedIn a job board?” and “Is Indeed a job board?” It was one of the more…

Is there a truly social job search service out there?

So perhaps you saw that LinkedIn has updated/upgraded its job search functionality? They sent me an email inviting me to give it a whirl, so I did – and it got me to thinking about social stuff and job search.

First, LinkedIn: the job search is nice, and it’s something that they should have done a while ago – but better late than never. You can search, easily see who is related to or in the companies you discover, follow companies, save jobs and…

A roundup of some new, interesting, and unusual recruitment and job board sites

It’s been a while since I looked at the newest crop of recruitment and job board sites, so I thought that we could take a trip down StartUpLane and see what we discover:…

A lot has happened since the 2012 Online Recruiting Industry survey - Indeed, JobFox, and JobCircle were sold, Facebook (sorta) launched their own job offering, and Monster didn’t sell itself. So it’s time to take the temperature of the industry again – and I… 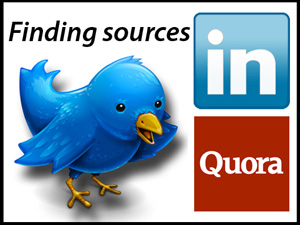 a look at how the industry is faring:

The eternal truths of online recruiting

Maybe it come from having been in the industry for a while, but some things just keep recurring: Bill Warren, John Sumser, Joel Cheesman, and job matching sites, to name a few. Seriously, though – although much has changed since the mid 90s, some things really haven’t. Ignore them at your own peril. For instance:

10 earth-shattering things that happened in online recruiting in 2012

Hey, it’s the end of the year (almost) and time to take a look at what happened in 2012. Did anything? Well, actually, yes – quite a bit. Apart from an election, a (slowly) recovering economy, and a snazzy James Bond film, it did seem like 2012 was a busy year for online recruiting. Here are my picks for the most notable:…

All the news that fits, starting with Facebook's (ahem!) new job board

Ok, the election is in the rearview mirror, winter is looming, and I bet you haven’t gotten all of your Christmas presents yet! Nevertheless, things keep happening in the job board and online recruiting world. For example:

This isn’t complete by any means, but thanks to John Sumser, Eric Shannon, Wikipedia, Chris Russell, and others, it covers the basics (I hope!). Amazing how far we’ve come in 22 years!…

Facebook launched its long-rumored job board offering last week. It was a bit rocky:

It's true - job boards are evolving before our eyes!

For years I’ve been writing about what I see as the evolution of job boards – away from the traditional ‘job postings and resume’ model, and toward something more social, interactive, flexible, and useful to both candidates and employers. Many factors are …

Is LinkedIn the future of job boards? Maybe…or maybe not

The folks at LinkedIn have been busy lately, rolling outnew features, connecting with their users at the LI conference, and busily expanding their empire in all directions. Some pundits are proclaiming that…

What’s ahead: why I’m attending HR Tech next week

Being a full time consultant is wonderful – I have the opportunity to work with hundreds of interesting clients, tackle unusual and cutting edge projects, and yes, get paid for it. But there is a drawback – although I’m in contact with dozens of people every week via phone, email, Skype, and Twitter, I don’t actually see them. I’m here in Iowa, and they’re…well, all over the world.

Conferences are a great way to see your colleagues and…

Should job boards and employment sites have these features? Just wondering...

As noted in previous posts, I’ve been thinking lately about what makes a job board good – or not. Below are a few questions to that effect – and yes, some employment sites have these features, but most do not. Maybe there absent features you’ve wondered about?

Are these really the dog days of summer? Maybe not, judging from the number of new job sites I’m seeing. Granted, some of these have been around in alpha or beta for a while, some have been flying under the radar, and some are simply new to me – but there seems to be no letup in the volume of start-ups in the online recruiting sector.

This is great, in my opinion. Startups force established players to rethink how they do business. They…

What kind of a threat does LinkedIn pose to job boards? And what should they do about it?