My company recently acquired a surgical company and now we are recruiting surgeons (we have several other lines of service: EM, Hospitalist, Anesthesia and Radiology).  I am researching what recruiters out there are making in terms of a commission amount for recruiting a trauma surgeon or trauma medical director.  Does anybody have any information out there they can share?  We want to make sure we are being competitive.  Thanks!

There is no such thing as a ‘passive candidate’

I have to admit I am sick and tired of hearing talk of ‘active’ and ‘passive’ candidates. Even though I admit to freely using the terms myself… until very recently.

But I am going to stop doing that.

People ramble on about ‘passive’ candidates, as if this is a totally fresh breed of human being, that only new-age, especially savvy recruiters know how to connect with. The ‘passive candidate’ has become a mystical ‘super-talent’, somehow superior and different to the bog-standard…

When I listen to recruiters discuss sourcing some have an amazing attitude.  They are like Labrador Retrievers on the search – pant, pant, pant, There!  Other recruiters act almost like sourcing is an imposition.  They want to try to find the easiest way to “screen out” candidates.

What is the correct attitude?  Well, recruiters who understand that recruiting is a sales process, enjoy the hunt for the perfect candidate.  Why is their attitude important?

Getting Our Vets Back to Work

Does Your Job Description Capture the Attention of Top Talent?

Attracting top talent today is a challenge. Job seekers are exposed to job descriptions everywhere on the internet – major job boards, niche sites, social media channels, corporate career sites, Google Ads, and more.  However, top talent rarely spends much time sifting through job listings – you have a limited opportunity to capture their attention.  Below are five best practices to ensure your job description captures their attention, and motivates them to apply.…

“Give me a job, give me security… give me a chance to survive…”

I don’t normally let candidates get to me. I’ve recruited in good times and bad, been screamed at, threatened, called names, and Lord knows what else by candidates who don’t handle rejection well. It’s rare, but it happens. I typically respond with a shrug and go on about my business. My experience with frustrated job seekers is, sadly, pretty broad (maybe it’s me?). Even still, this latest meltdown was…

Dissecting the Interview Process: Guidance for Both Candidates and Employers

For both job seekers and hiring managers in Accounting, Finance, IT and Administrative Support, interviewing is arguably the most difficult part of the employment process. From the candidate’s point of view, the idea of speaking directly with a potential employer can be stressful, as exact interview questions can never be fully anticipated.  Even if the candidate is confident in his or her ability to succeed in the new position, there is a possibility for error during the interview. …

Being wrong chafes the ego yet often leads to a greater right. Nowhere has this been more true in my own life than my failed ten-year marriage that ended in 2007. That decade of futility saw two amazingly stubborn people persist in a relationship that neither wanted to admit was fated from the start. Only when gut-wrenching honesty prevailed was I able to admit that not wanting to be divorced was a terrible reason to remain in an unhealthy and incompatible marriage. I had forgotten one of…

Representation of a Reputation

I'm the current newbie here at Lipton Fleming and the other evening, whilst sharing a few civilised drinks and a game of Trivial Pursuit in the local, I was grilled by my friends about my new job. After the usual platitudes the conversation evolved into the way people perceive recruitment consultants. I doubt it will come as much as a surprise to hear that we aren't regarded very highly.

Recruitment consultants, on the whole, have a pretty bad reputation. I think it is…

You may have noticed that I have an active imagination…Enjoy the ride!

Remember when you finished your last box of cereal and decided to stop quickly on the way home to replace it?  Dinner will be ready soon and this was going to be a very quick stop.  What would happen if your fictional experience at the Grocery store was the same as a group of candidates visiting your corporate website looking for your list of openings and desiring to simply submit their…

Select with Certainty: A Guide to Candidate Phone Screens

Since 1981, I have worked with over 3000 hiring managers across the United States.  Most of whom have never been trained how to interview.  If they haven’t been taught how to interview, they certainly have not been taught how to select the best fit.  Therefore, they bring their own unique interview techniques and questions to the interview party.  Of course, the candidates bring their own special treats to the interviewing party; and I will share some of those also.

A bull or bear jobs market? Or does it matter?

(this post is a reprint of my article written Jan 2011)

The one thing economists seem to agree on is that people who already have jobs will get pay increases or bonuses this year. (Keep your checkbook ready.) But there are conflicting data in the news about how many companies actually plan to hire in 2011—and I’m not sure that it really matters. Whether it’s a bull or bear jobs market, companies that continually nurture their people will always maintain the…

Here is our weekly feature in which we share the top articles we enjoyed from the past week about recruitment marketing, social recruiting and anything else in the recruiting space. In this article, we’ll be talking about Big Data, Recruiting Videos, Talent Communities, Work Metaphors and Used Car Salesmen.

Over the years much has been written on succession planning.  Even when I was a Gen X’er in school I was told at numerous times how I would be posed to replace retiring Baby Bommers.  Succession planning has been on the minds of many for many years. However, succession planning is one of those things that does not get done, despite the conversations.  Why?  The reasons are multiple ranging from activity that has no immediate payback to generational gaps to complete cluelessness as how to…

The DIfference One Can Make - The 212 Degree Philosophy There are times in every career, every moment of the day where a point of decision about how to approach things, how to win the battles that others throw our way, and how to make greatness the pivitol differentiating inner commitment where one defines for themselves just how much they will shackle negativity by the horns and overcome countless obstacles on…

We just announced the first winner in our weekly cartoon caption contest - every week we awarded $50 Amazon certificate.

Here's one of the two cartoons we produced from our first contest: 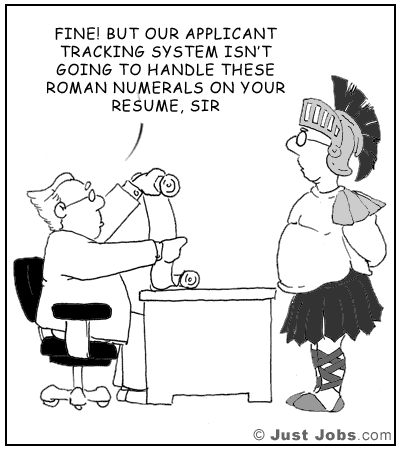 It's no secret that there is a huge need for IT talent right now.  A recent PC World article analyzes how many corporate IT departments are turning…

Here is my opinion on what…