According to Penny, This is the kiss of death.

Penny: Hi, how did the interview go?

Candidate: It was GREAT! I did really well, I think they were really impressed and I'm really interested in the job.

Please see my response to the… Continue 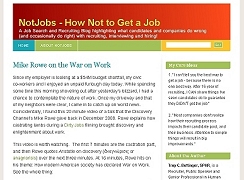 Find my blog on Wordpress: http://notjobs.wordpress.com/

On the business of recruiting...

"Recruiting is about driving the business forward. Competitive advantage. Period. Nothing more, nothing less. It doesn’t exist to get people jobs and it doesn’t exist so that people who couldn’t get jobs being a camp counselor can make 6 figures. That means that you figure out the positions that will make or break your company and you get the perfect person for that job, and you pour your blood, sweat and tears into that, and… Continue

Submit your Funniest Telephone Names Sourcing Tactic and be immortalized by the talented Jim Stroud in one of his famous cartoons in his " The Recruiting Life" series.

The winner will also receive

1. The Magic In The Method - all past and upcoming training courses
2. One year of the… Continue

Mr. Harry Joiner Wins A Year Of The Fordyce Letter

Congrats to Harry Joiner.
Harry is the winner of the 1st ever RecruitingBlogs.com contest. He
submitted what he considered to be the best recruiting lesson he ever
learned. Harry wins a year of the Fordyce Letter. There were about 16
other great submissions. Thanks… Continue

Which Will Be The First Web 2.0 Job Board?


In all the articles in the mainstream press trying to educate the masses about what web 2.0 is, almost none include a site solely dedicated to
employment classifieds among their lists of prototypical web 2.0 sites.
A few articles might make reference to LinkedIn, but usually more as a
social networking site than primarily a vehicle to find a job or an
employee.…

"I'm a little surprised that anyone would have a problem with John Sullivan's stand on aggressive recruiting tactics. In my opinion, once you've made the decision to poach another company's employees, you've already crossed the line. Other than misleading a candidate about the merits of the job, everything else a recruiter does to find… Continue

Even in the Age of the Internet, it can still take a lot of time for changes and trends to become publicly known among a volatile group of people like job seekers. As a result, when the job market evolves in Israel or elsewhere, what once was true can become myth. Here are how some of those old truths look today.

Robert Cringeley takes the pulpit in his latest article titled “The Final Days of Google: It is going to be an inside job“.

Cringeley writes:
“Google is an amazing entrepreneurial petri dish. Yet at the same time, it is doomed to disappoint nearly…

Feeling The Candidate's Pain of Dealing with Recruiters

(Disclaimer: to all the great recruiters I have spoken with, and that I am waiting back to hear from, no, this doesn’t apply to any you. You all gave me permission to keep in touch, and have been great to deal with. You know who you are - and if you are reading this, THANK YOU!)…

Having said that, today I received my June 2007 Fordyce Letter. The new look and feel are great! The publication is thicker and contains even more great material than it did before. Now there's even MORE great material for me to struggle to finish each month. Thanks, ERE!

Now for the complaint: I hate the… Continue

I appreciate the warm welcome...

Hi everyone and thank you for the warm welcome.

I am getting married June 16th & working on some very engaging and intense projects right now.

Will start the process to craft my identity here and share some insights for your consideration after the wedding.

Slouch - thanks for your offer and I will take you up on it.

The Best Recruiting Lesson I ever Did learn....

I know making a decision has not been easy for the Recruiting Animal.
Life is hard enough when you live in a cave with no electricity and no
fresh running… Continue

"Social networks suck. There is a new social network launched every other day, and they suck as well...The biggest risk to all social-networking players is the flighty, unpredictable behavior of Internet users...In an attempt to keep visitors hanging around, many social networks are integrating entertainment, such as videos, music clips, blogs, and instant messaging into their sites. But with each new update, social networks become harder to… Continue

"The professional world is increasingly the last outpost of civility in a world where 'upper class' is defined by Paris Hilton instead of Jackie Onassis. 'You are what you blog,' is the order of the day here: if you call Bill Gates a coprophagic pederast, I'll take your word that's honestly representative of your feelings, but I'll also back slowly away from you while looking for the exit."

My favorite quote this week comes from Brian Tome, one of the senior pastors at my church. He said this morning, "You will get a person's best when you encourage and uplift them; you will not get their best when you criticize and belittle them."

The Virtue of Short Posts

LinkedIn, MySpace, Craigslist, Google Base, and anyone else in the classifieds biz should take note. If you haven’t been using Facebook…

I was talking to Harry Joiner
yesterday and he was telling me that I should compile a top 25 list of
Recruiting Blogs. I said that is crazy, everyone knows that those Alexa rankings don't mean anything. I told him everytime I speak to John Sumser or… Continue

As posted this afternoon on MN Headhunter:

Two years ago Monday, May 21st, I started this MN Headhunter blog. This post also hits a milestone of 500 posts.

Before getting into this I did not intentionally make this the 500th post.…